‘From East to West’ by Kevin Clark 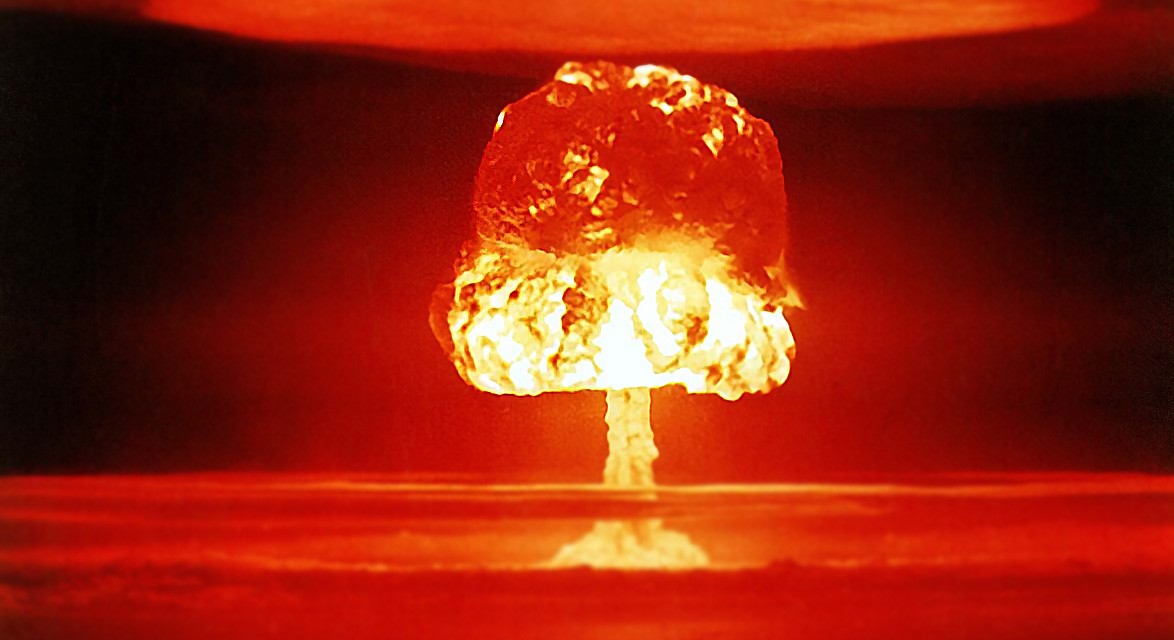 Study this story for the way the author sets up the climax, by repetitive foreshadowing of a coming event through different points of view. This short story is one of several that are paired with the Bayley Bulletin Winter Quarter Short Story Contest.

When the first pale light of the sun fell upon the roof of the tallest building on East Main Street, barely more than six hours remained. When the townspeople woke, sleepily cursing the regularity of their alarm clocks, even one of those hours had already perished.

Did anyone know that shortly after noon that day, the most awesome power known to man would be unleashed?

The people of the town, heedless of such ultimate ends, went about their daily activities as if the purpose of life were a full stomach and a clean-shaven face. If someone had told them they would meet their maker this day, would they have cared? Perhaps. Would they have changed? Doubtful.

But if someone had said that this was the day they would all render up their souls, it would not have been true. Not all would die this day. Some would live on a little longer, but none would live as long as he thought or believed or imagined.

Maggie Klein kissed her young son goodbye and started off for work. She hated to leave him with Mrs. Kelly all day, but what choice did she have? She had to make some kind of a living, even if it meant hours away from Timmy.

She reached the hotel at 8:35 and quickly got her mop and bucket and raced up to the third floor to start work. She hoped Mrs. Duncan had not noticed and that she could secretly make up the time, but Mrs. Duncan let nothing get by her. She was waiting like an expectant cat in front of a very tender mouse.

“Do you know what time it is!” she said.

“Timmy, Timmy, Timmy, that’s all I ever hear from you. You’d think I pay you to hear what latest problem that kid has!”

“I promise, Mrs. Duncan, it will never happen again.”

“Oh, you can be sure of that, young lady! I’m not going to stand for it anymore. I can’t let you get away with this kind of thing and expect everybody else to be here on time. I knew I should have never hired you. Single mother, ha! But I gave you a chance, and look what I get. You can finish out the week, mind you, but Friday’s your last day. Then you can go tell somebody else all about that kid of yours.”

As Maggie stood there about to cry, Mrs. Duncan trundled off down the hall mumbling something about not keeping sluggards on her payroll anymore. No sir, not anymore.

By 10:00 am, Main Street was crowded with people out to spend or earn a dollar. How they would have laughed at the thought that in a little over two hours it would all be meaningless. Why didn’t they see that only the eternal mattered? Why did they spend more time worrying about the price of gasoline than the state of their souls? How could they go through life thinking that death was the end to all existence, and not caring anyway?

Father DeStefano looked out the window of his rectory down upon the street below and asked himself these questions. He was a simple and holy man who had been raised all his life to mumble a prayer where others had learned to curse. He understood well enough the temptations of the world, for he sinned also. But he could not understand a life without God. He did not know how modern man could think that God would cease to exist if no one believed in Him. Man could not be rid of God through wishing Him away anymore than he could wish away gravity.

He looked at the people and wondered why they would not let themselves love God, and instead, tried to flee his love. Did they think themselves too good for Him who held them in being? Why were so eager to be loved for a night and so unwilling to be loved for an eternity?

When the time came, Father would be prepared. He was always prepared. He would welcome all things as a gift from God and for His greater glory.

At Ernie’s Barber Shop, the old men gathered as usual to talk about baseball and the way things used to be. The big round clock on Ernie’s price list said 11:30, and with each and every revolution of the hands, it meant that there was …

“Not much more time left, Ern.”

“They’re only ten games out of first!”

“There’s thirty-three games left, Freddie. Just you wait, they’re gonna make a comeback. Why, I remember in ’54, nobody thought they could do it, but they did. Now, I seen them boys play on the TV the other day, and this is the best team they’ve had in ten years. If anybody can do it, they can, that’s for sure.”

“I swear, Ern, you say that same thing every year. They just ain’t no good. Why don’t you give up on ‘em?”

“Give up on ‘em, Freddie? I been rooting for them for sixty years, since I was a kid and …”

“I know, since you was a kid and you used to sneak into the ball park.”

“All I know is, one of these years, they’ll do it. Then you’ll see. All they need is time.”

The big clock on the tower at city hall sounded twelve noon, and all the office doors opened and poured their occupants out onto a busying street. It was just another day, just another lunch, and then back to work. If someone looking on had known what was going to happen, would he not have tried to warn them, to tell them what was coming? It would have done no good, though. They would not have listened. But there would be no warning today; there would be no sirens. It would come as a total surprise and catch people wherever they stood. It would come, indeed, to the old man sharing his paltry meal with a stray dog, just as surely as to the mischievous boy stealing candy from the drug store.

Maggie went to check on Timmy over her lunch hour and found his fever was gone. He was feeling so much better that she decided to take him to noon Mass. She would be a little late, but in plenty of time to make communion.

As she genuflected before the pew, she noticed that the regulars were all present. There were the three old women who lived together in her apartment building, and the elderly couple from down the road. Only a few were as young as she. They were all poor, but not to be so for long, because soon the Kingdom of God would enter them.

Then, it happened. In one blinding instant, the power of God was unleashed, and Jesus Christ, Body and Blood, Soul and Divinity, dwelt upon His altar, with His people. Suddenly, worldly things mattered no more, the poor became rich, and the angels watched in muted wonder. From East to West, a perfect sacrifice was made to the glory of His Name.

The clock struck 12:30, and the accountants went back to their books.

If God is truly present in the Eucharist, then daily Mass is the most important thing that happens in every city, and town, and hamlet in the world.