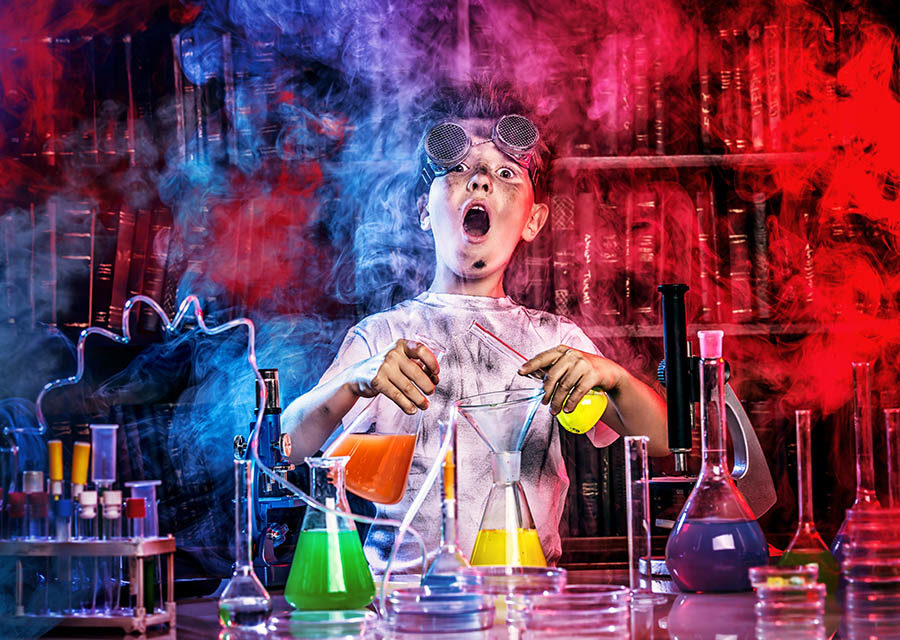 “But having a really good understanding of history, literature, psychology, sciences- is very, very important to actually being able to make movies.”— George Lucas

My eyes hurt. I’ve been ambitiously staring at my fingertip hoping to witness the Kinetic Theory of Matter. I was attempting to see the smallest shift on my fingertip’s surface when my experiment gets interrupted by mother calling me to face my adversary: Dirty Laundry Mountain. I sigh, retire my finger, close Seton’s Chemistry Lesson Plan and Apologia Chemistry book to haul and dump the laundry in the washer. Afterwards, I open the dryer, still pondering this fantastical lesson when little bluish bolts illuminate the dark as I separate the still-hot fabrics. An exothermic process! My mind fairly shouts, recalling an acid-base reaction lesson from Module 9. Chemistry does occur in real life and not in stuffy Socratic writings! Seton’s Chemistry course gives a spiritual and fresher understanding of our electrical planet, imparts the subject in an exciting and clear-cut manner, and will greatly aid my future career, the cinematic path.

To begin with, Seton’s Chemistry centers on a fresh and sublime understanding of the metaphorical wheels, screws, and gears of the universe.  Curiosity is piqued by topics taught from surprising angles. For example, after reading about polarity and compound formation, a discussion would explain the chemical magic behind soap’s cleaning prowess. Moreover, an inspiring standout in the course is the underlying basis that the universe simply CANNOT exist without a Maker. This sets Seton’s Chemistry apart from most courses which glorify “evidence”-backed theories that claim how sheer chance rules science. The course cites several highly renowned scientists such as Charles Stine, Robert Boyle, James Joule, and Baron Kelvin who taught that science asserts a Creator, God, running things behind the scenes. The course also relates biblical truths to scientific findings among topics like atomic structures, quarks (not aliens; a fancy name for subatomic particles), and thermodynamics. Aiming to know the Maker from studying His creation sums up the course’s objective.

Mere knowledge would not suffice by itself; rather, it needs to be communicated to be fully appreciated. The course’s layout and unique style make it very engaging. Lessons ranging from measurements to oxidation are divided into graspable modules that introduce each new topic while incrementing previous ones. This approach makes topics (such as the ozone layer and chemist William Thomson’s becoming Lord Kelvin) more memorable. The course’s upbeat and straightforward tone–most evident from the textbook– makes Chemistry very intriguing. The lessons are delivered in a casual but academic manner, perfect for tinkering minds on learning more about God through science. Highfaluting abstracts are cut away while the essentials are presented clearly, helping me to understand almost anything from how H2O is water to why my free-falling iPod kissed the pavement and cracked its screen. Furthermore, the course’s creative presentation of science is what makes it really exciting for me since it directly relates to my aspiration: a blend of science and creativity.

Chemistry and Filmmaking. They don’t seem to be neighbors who greet one another “Good morning!” every day. You won’t see blaster-strutting Stormtroopers marching down the Death Star’s corridors reciting the periodic table or Indiana Jones solving hydrocarbon formulas to whip his enemies. Surprising as it may seem, I’ve realized that Chemistry will cast itself onto the soundstage of my future work: writing and making movies.

Chemistry will enable me to dig deeper in learning what makes a movie, a movie. I was struck by how related and applicable to filmmaking the concepts from the topic Ionic and Covalent Bonding were. Chemical Bonding allows new material to form from unlikely elements by having elements share or transfer their electrons. To illustrate a specific analogy, sugar is actually composed of hydrogen, carbon, and oxygen, otherwise inedible and dangerous by themselves. When combined, oxygen and hydrogen, fire spreaders, form water (good old H2O) which extinguishes fire. Similarly, base film components like visual effects, budget, cinematography, acting, directing, music, makeup (yes, powders and all), setting, and the little black-and-white clapping board all harmonize to create the heart and soul of a blockbuster. Aside from Chemistry’s application to the Big Screen, the most important part Seton’s Chemistry taught me is that when I finally sit on the director’s chair, I’ll know that there would be Someone on a bigger director’s chair guiding and overseeing His creation, the world’s greatest production.

Studying Chemistry garnered me a profound insight into our world and its Creator’s wisdom. The course’s stirring style furthers learning to new heights. As I yell “That’s a wrap!” and take the final cut, I only have to remember H2O and that the One who made it has always been my director.

A hilarious raconteur, he is the oldest among his 3 siblings. He loves acting, playing the guitar, Saint Philip Neri, and creative writing. He is a competitive runner, soccer player, and a "tree climber." He spends most of his free time figuring out how to: do a backflip, bring back dinosaurs from the past, cook up a flying car, and build a real lightsaber. He lives near Taal Volcano (The World's Smallest Active Volcano) in the Philippines. He hopes to be a filmmaker and an inventor one day soon.