For most people, the word “Christmas” immediately evokes images of warm fires, giant pine trees dressed in multicolored lights, people warmly dressed, streets coated with snow, and snowmen standing at attention, ready for the first snowball fight of the season; at least, that’s how most movies typically depict Christmas.

The Philippines, however, is a tropical country with only two seasons a year, the wet and the dry seasons. Therefore, it’s a positively frightening (plus preposterous) thought to have snow during Christmas!

Instead, whenever I think of Christmas in the Philippines, I instantly think of the variety of food served at Christmas parties, because food plays a gravely important part in Filipino Christmas celebrations. (We simply can’t have a Christmas feast without lechon and pancit!)

However, since the Philippines is distinguished as the only Catholic country in Asia, most of our Christmas customs have a deeply spiritual significance. So, when I think of Christmas, I also think of belenes displayed in churches and in private homes. I also see in my mind’s eye all the many parols, specially decorated paper lanterns lit with different colored lights, hung outside homes and business establishments.

These lanterns commemorate the star of Bethlehem, which guided the three Kings to the Christ Child. However, there is one custom that goes hand in hand with the custom of hanging parols. This custom particularly strikes me for its beautiful spiritual significance, and it is probably the most notable Filipino Christmas custom. This custom is called Simbang Gabi, or Missa de Gallo.

Interchangeably called “Simbang Gabi” and “Missa de Gallo” (which both mean “pre-dawn Mass”), the Simbang Gabi is simply a novena of nine Masses offered to honor the Blessed Virgin Mary and to prepare for the great feast of Christmas.

Since this novena follows the usual Catholic practice of completing nine days of prayer in petition for a special favor, most Filipinos believe God will grant their petitions once they have completed the Missa de Gallo novena.

Therefore, on December 16 of each year, churches all over the country begin these novena Masses, culminating with the last Mass offered on the morning of Christmas Eve. Although this doesn’t seem to be a unique or special custom, one important detail that makes this custom special is that these Masses are offered before dawn, usually around four in the morning. Besides this, almost every Filipino attends these Masses at least once in his lifetime.

Although the custom of Simbang Gabi is an authentically Filipino custom, it was handed down by the Spanish missionaries, who came to the Philippines in the sixteenth century. The custom of “Missa de Gallo” originated in Mexico in 1587, when the Pope gave a special dispensation to Fray Diego de Soria, the prior of the convent of San Agustin Acolman, to offer the Holy Sacrifice of the Mass outside the church.

The prior sought this special permission, because vast numbers of faithful came to assist at Mass, but they could not all be accommodated within the church. When the Spaniards came to the Philippines, they brought this custom with them, because Masses were often offered outside the church, so all the faithful could assist at the Holy Sacrifice.

This custom began in the Philippines in 1669, when the missionary friars offered pre-dawn Masses for the farmers. Since the harvest season occurred, farmers often rose two hours before dawn, because they had to be working in the fields by sunrise.

The spiritual shepherds of the people desired to give spiritual nourishment to the faithful before they sent them out to begin the day’s work. Thus, began the custom of offering the Holy Sacrifice of the Mass at four in the morning.

Each day, farmers and their families would wake up before dawn and walk to the nearest church in the piercing cold air of early December mornings. Since it was also as dark as midnight, the lights from the parols would guide the faithful to the church, where the King of Kings waited for them in the tabernacle.

After each Mass, the people would usually gather together outside the church to share in the general joyful atmosphere of Christmas, exchanging stories and eating classic Filipino desserts, like bibinka. Since that time, this tradition has been handed down from generation to generation in the Philippines.

Nowadays, churches all over the Philippines (and even outside the Philippines, where Filipinos bring this custom with them) offer the Missa de Gallo novena Masses. Often, as early as September, churches hang their “Parish Activities” bulletins for the remainder of the year, and the Missa de Gallo has a spot on it. By the end of November, one can hear the priests and choir members discussing the possibility of offering sung Masses during the novena.

When December 16 arrives, everyone can feel the general excitement and anticipation for Christmas in the air, as they realize it is only nine days away. Without even looking out the window, one can sense the approach of the feast of Christ’s birth by simply hearing people bustling about at four in the morning.

Since my family lives in the middle of a busy and bustling city, people rarely wake up at four in the morning. Waking up to attend the Missa de Gallo Masses really pulls people out of their usual routines and reminds them the great feast of Christ’s birth is approaching. It serves as a great form of penance, since most people I know, who assist at all the Masses, are dead tired by Christmas Eve because of their lack of sleep.

Honestly, I’ve only assisted at all nine Masses once in my life. I remember assisting at them with my mom a few years ago. I made an effort to get up early in the morning and go to church with her. I wanted to experience assisting at the pre-dawn Masses, but I admit I was partly spurred to go, because I wanted God to grant me a favor.

Each morning, my mom would wake me up early, and it was still dark outside. I’d hop out of bed immediately, because I was so excited by the newness of the experience. Then I’d dress quickly, because I wanted to protect myself from the cold morning air as it penetrated my skin.

After getting dressed, I’d quietly make my way to the garage. because I didn’t want to disturb my dad and my siblings. Once I got into the car, my mom would drive us to the church.

I don’t remember what first struck me when I entered the church, but I marveled at the life-size nativity scene placed at the side altar. I loved looking at the elegant clothing of the three kings, the loving look in the Blessed Virgin’s eyes, and at the manger, where the Baby Jesus was to be placed during the Christmas midnight Mass.

Slowly, the church was filled with people as the Mass was about to begin. When Mass started, I was in the pew with my mom, struggling hard to keep my attention focused on the Mass instead of on the novelty of the event.

Basically, the same thing happened on each of the nine days I assisted at Mass, but one day was different from the rest. It was a Sunday, and there was a strong hurricane coming. This didn’t deter us from going to Mass. My mom and I still went as usual and so did about fifty other people. Finally, the storm arrived during the Mass.

I knew this because all the lights went out in the church, and I could hear the wind howling and the trees swaying to and fro in the strong wind. The Mass continued, and we could only see by candlelight. Although a storm raged outside the church, none of the faithful were troubled by this. The light of the candles only added to the beauty of the Mass.

Finally, all nine Masses of the novena were completed. Although I can’t remember whether God granted my petition, I knew I would love to attend the Missa de Gallo Masses again.

I’m sure it will be a most wonderful and sanctifying experience, because we’ll be assisting at the traditional Latin Mass. This time, I’ll ask God to grant that all men may soon come to share in the same Holy Catholic Faith with which He has blessed me. 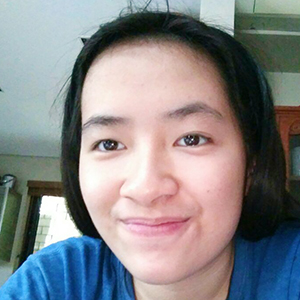 Josephine (more commonly known as “Nadine”) is a seventeen-year-old senior student who is looking forward to graduation day, yet dreading the first day of college. She loves drawing, sketching, painting, playing on her guitar, singing loudly and usually off-key, eating, writing whatever stories come to her mind, and reading tons of books. When she isn't doing her school work or other hobbies, you can find her praying, staring blankly into space, or trying to discover a wardrobe that actually leads to Narnia. She would also love to scientifically prove someday that she is part hobbit and part dwarf as she shares the same appreciation for nature and shiny objects as hobbits, yet is as boisterous as dwarfs. She also deeply loves her Catholic Faith, which she has learned so much about through Seton. Finally and most importantly, she will always love and treasure the Latin Mass and Gregorian Chant.)