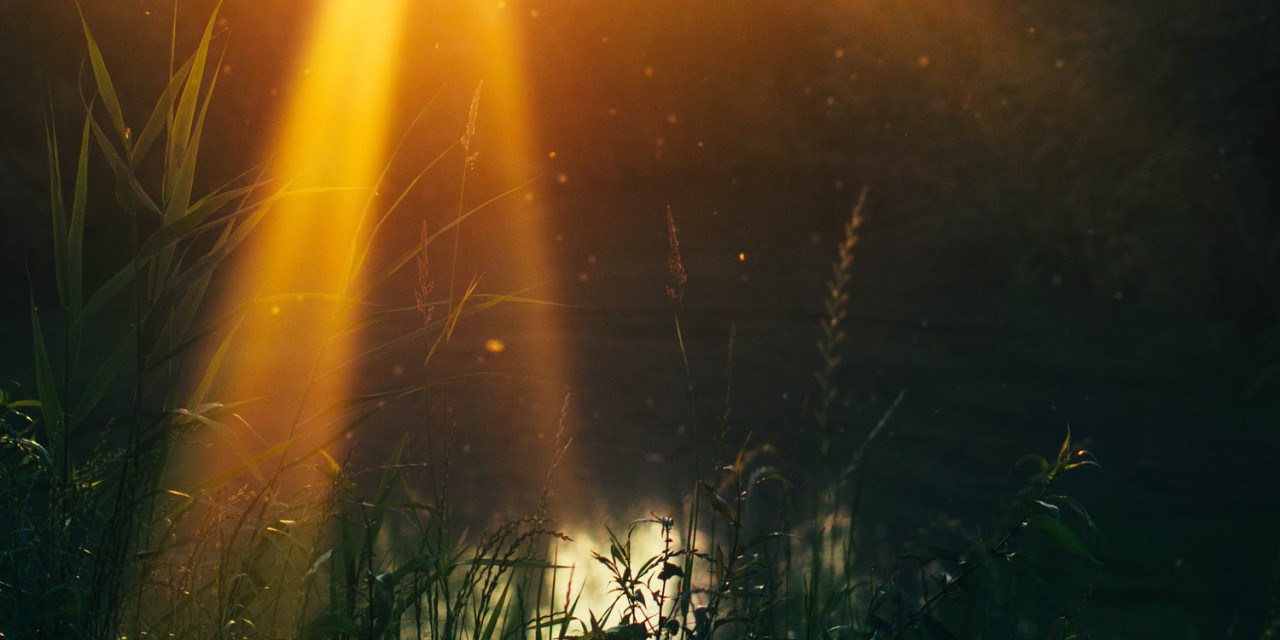 Editor’s Note: This story set in Ireland conveys, through the eyes of a young boy, a deep sense of the beauty of nature. This short story is one of several that are paired with the Bayley Bulletin Winter Quarter Short Story Contest.

The sun was setting, spilling gold light on the low western hills of Rathlin Island. A small boy walked jauntily along a hoof-printed path that wriggled between the folds of these hills and opened out into a crater-like valley on the cliff-top. Presently he stopped as if remembering something, then suddenly he left the path, and began running up one of the hills.

When he reached the top he was out of breath and stood watching streaks of light radiating from golden-edged clouds, the scene reminding him of a picture he had seen of the Transfiguration. A short distance below him was the cow standing at the edge of a reedy lake. Colm ran down to meet her waving his stick in the air, and the wind rumbling in his ears made him give an exultant whoop which splashed upon the hills in a shower of echoed sound. A flock of gulls lying on the short grass near the lake rose up languidly, drifting like blown snowflakes over the rim of the cliff.

The lake faced west and was fed by a stream, the drainings of the semi-circling hills. One side was open to the winds from the sea and in winter a little outlet trickled over the cliffs making a black vein in their grey sides. The boy lifted stones and began throwing them into the lake, weaving web after web on its calm surface. Then he skimmed the water with flat stones, some of them jumping the surface and coming to rest on the other side. He was delighted with himself and after listening to his echoing shouts of delight he ran to fetch his cow. Gently he tapped her on the side and reluctantly she went towards the brown-mudded path that led out of the valley. The boy was about to throw a final stone into the lake when a bird flew low over his head, its neck a-strain, and its orange-colored legs clear in the soft light. It was a wild duck. It circled the lake twice, thrice, coming lower each time and then with a nervous flapping of wings it skidded along the surface, its legs breaking the water into a series of silvery arcs. Its wings closed, it lit silently, gave a slight shiver, and began pecking indifferently at the water.

Colm with dilated eyes eagerly watched it making for the farther end of the lake. It meandered between tall bulrushes, its body black and solid as stone against the greying water. Then as if it had sunk it was gone. The boy ran stealthily along the bank looking away from the lake, pretending indifference. When he came opposite to where he had last seen the bird he stopped and peered through the sighing reeds whose shadows streaked the water in a maze of black strokes. In front of him was a soddy islet guarded by the spears of sedge and separated from the bank by a narrow channel of water. The water wasn’t too deep—he could wade across with care.

Rolling up his short trousers he began to wade, his arms outstretched, and his legs brown and stunted in the mountain water. As he drew near the islet, his feet sank in the cold mud and bubbles winked up at him. He went more carefully and nervously. Then one trouser fell and dipped into the water; the boy dropped his hands to roll it up, he unbalanced, made a splashing sound, and the bird arose with a squawk and whirred away over the cliffs. For a moment the boy stood frightened. Then he clambered on to the wet-soaked sod of land, which was spattered with sea gulls’ feathers and bits of wind-blown rushes.

Into each hummock he looked, pulling back the long grass. At last he came on the nest, facing seawards. Two flat rocks dimpled the face of the water and between them was a neck of land matted with coarse grass containing the nest. It was untidily built of dried rushes, straw and feathers, and in it lay one solitary egg. Colm was delighted. He looked around and saw no one. The nest was his. He lifted the egg, smooth and green as the sky, with a faint tinge of yellow like the reflected light from a buttercup; and then he felt he had done wrong. He put it back. He knew he shouldn’t have touched it and he wondered would the bird forsake the nest. A vague sadness stole over him and he felt in his heart he had sinned. Carefully smoothing out his footprints he hurriedly left the islet and ran after his cow. The sun had now set and the cold shiver of evening enveloped him, chilling his body and saddening his mind.

In the morning he was up and away to school. He took the grass rut that edged the road for it was softer on the bare feet. His house was the last on the western headland and after a mile or so he was joined by Paddy McFall; both boys dressed in similar hand-knitted blue jerseys and grey trousers carried home- made school bags. Colm was full of the nest and as soon as he joined his companion he said eagerly: “Paddy, I’ve a nest—a wild duck’s with one egg.”

“And how do you know it’s a wild duck’s?” asked Paddy slightly jealous.

“Sure I saw her with my own two eyes, her brown speckled back with a crow’s patch on it, and her yellow legs—”

“Where is it?” interrupted Paddy in a challenging tone. “I’m not going to tell you, for you’d rob it!”

“Aach! I suppose it’s a tame duck’s vou have or maybe an old gull’s.”

His mind told him that Paddy was right, but somehow he couldn’t give in to it and he replied: “She’ll not forsake it! She’ll not! I know she’ll not!”

But in school his faith wavered. Through the windows he could see moving sheets of rain—rain that dribbled down the panes filling his mind with thoughts of the lake creased and chilled by wind; the nest sodden and black with wetness; and the egg cold as a cave stone. He shivered from the thoughts and fidgeted with the inkwell cover, sliding it backwards and forwards mechanically. The mischievous look had gone from his eyes and the school day dragged on interminably. But at last they were out in the rain, Colm rushing home as fast as he could.

He was no time at all at his dinner of potatoes and salted fish until he was out in the valley now smoky with drifts of slanting rain. Opposite the islet he entered the water. The wind was blowing into his face, rustling noisily the rushes heavy with the dust of rain. A moss-cheeper, swaying on a reed like a mouse, filled the air with light cries of loneliness.

The boy reached the islet, his heart thumping with excitement, wondering did the bird forsake. He went slowly, quietly, on to the strip of land that led to the nest. He rose on his toes, looking over the ledge to see if he could see her. And then every muscle tautened. She was on, her shoulders hunched up, and her bill lying on her breast as if she were asleep. Colm’s heart hammered wildly in his ears. She hadn’t forsaken. He was about to turn stealthily away. Something happened. The bird moved, her neck straightened, twitching nervously from side to side. The boy’s head swam with lightness. He stood transfixed. The wild duck with a panicky flapping, rose heavily, and flew off towards the sea. . . . A guilty silence enveloped the boy. . . . He turned to go away, hesitated, and glanced back at the bare nest; it’d be no harm to have a look. Timidly he approached it, standing straight, and gazing over the edge.

There in the nest lay two eggs.

He drew in his breath with delight, splashed quickly from the island, and ran off whistling in the rain.